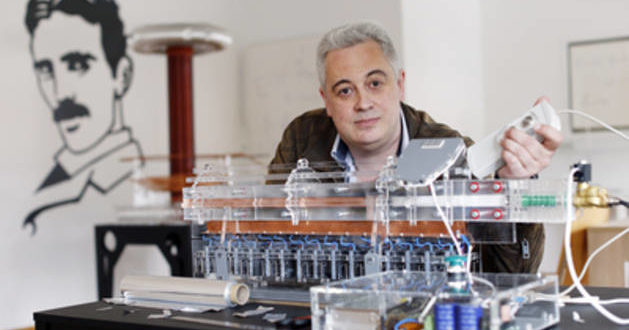 Anton Popov opened the Phys Land Museum in Slovenia. He also assisted in opening a similar museum in St. Petersburg.

Why did Popov decide to open a museum exactly in Slovenia? Because this state has a good reputation, and living at the Bled Lake is commercially more favourable than somewhere at a Swiss lake. Anton Popov believes that Switzerland is overestimated, whereas Slovenia is underestimated. The possibilities of demonstrating what happens in the nature, and how people make use of it, are endless.

The “Triglavska roža” information centre in Bled became richer thanks to an original exhibition. The museum premises are saturated with a distinctive atmosphere, as if you appeared in the future on a scenario written by talented science fiction writers of the past or in a studio, where a sci-fi film is shot. Ordinary citizens know little about physics. Schoolchildren and first year students have troubles when studying this subject. Therefore, the instruments that demonstrate in action the nature phenomena and inventions that once were impossible to use, are highly welcome today. Who is he, 47-year-old Anton Popov, who simply and naturally opened his “antimuseum” for visitors? Of course, he is a businessperson, a physicist as well as a collector and an enthusiast with original views and belief in himself. The museum fascinates onlookers and surprises experts.

Your life flows like a river, if to remember that two years ago, you opened the Museum of Future in your native city of St. Petersburg, and this year you have moved to Bled and opened here one more museum.

“I first visited Slovenia in March 2014 and started thinking of a possibility to resettle. I wanted to take advantage of the benefits simultaneously offered by a megalopolis and a village. This is not surprising, because I lived for several years in St. Petersburg with a population of 5 million people. I visited Ljubljana and then Bled, which is incredibly beautiful, and people here are hospitable. Ljubljana is only 40 minutes of driving from Bled. That is, Bled provided me with the advantages of a megalopolis and a village at the same time.”

Why did you leave Russia?

“I am often asked this question. St. Petersburg and Russia in general are in an unfortunate position, which is unfavourable for running business. Therefore, I was looking for new opportunities. It seems to me that Slovenia is underestimated, but eventually this situation will change. When this happens, I want to be at the right time and in the right place. If I wanted to live near one of the Swiss lakes, what I was also thinking about, it would have cost me 10 times more. Switzerland, as compared to Slovenia, is overestimated. The guests of my hotel, who are used to spending vacations in Austria, tell me that from now on, they will happily come to Bled. Even if they would have to travel 100 kilometres more.”

You have purchased a hotel in Bled.

“A small hotel with rooms and breakfast. Last year, it was full during all three summer months. In general, I am very satisfied with the first year of work. I bought it, so that my family had enough funds for living. Now this is our source of income. The hotel is a very good support for us, but of course it will not make me a millionaire.”

Tell us briefly about your business.

“I run a company with 10 employees and call it an “open science”. It is a small, but very effective business. We manufacture equipment that you can see in the “Antimuseum”, as well as some training aids and devices that are used by research centres. We develop computer games that require knowledge of physics. All of the above mentioned is a niche. Our team does everything itself. Our market is not so saturated. The intellectual barrier defines its boundaries. I employed qualified specialists, electrical engineers, who are able to produce devices with high voltage. Besides, I provided an original design, because such equipment cannot exist without modern design. We have three-dimensional machines. We also use them to produce souvenirs. We receive funds from selling tickets to the museum. Of course, the museum in St. Petersburg is three times higher. It occupies 120 square meters in an old building with high ceilings. We have, for example, a 4-meter high flame generator that resembles a tornado.”

What devices would you want to show in the Bled museum?

“We will start with simple experiments, such as a pendulum, and will continue to high-tech. With the help of the pendulum, which, at first glance, is a child’s toy, you can easily calculate the gravitational acceleration. In the past, it was the first device that helped to demonstrate the Earth’s rotation around its axis, as a pendulum on a long string features higher stability. I would like to mention the perfect electromagnetic accelerator or the Gauss gun (Gaussov top, cxem.net), which without any mechanical forces activates a ball with the acceleration, which exceeds the force of gravity by 1,000 times. Out of all living beings, only a flea can survive such speed. We also have a “peaceful atom”. In fact, this is the electromagnetic plasma accelerator. It converts a piece of aluminium foil into microscopic droplets. The US Army uses this technology. An unidentified flying object is a vessel with an ion thruster, which demonstrates the way we will move in the future. The resonant transformer or the Tesla coil (Teslova tuljava, cxem.net) is a device for generating man-made lightning that works under voltage of 1 million volts. However, it is absolutely safe because of its high frequency, so the electricity flows only through the upper layers of skin. Knowledge of the nature gives us many tips. In our museum, we want to demonstrate how certain processes happen in the nature, and how a man can make use of it.”

The name “Antimuseum” sounds strange. Maybe it would be worth using the term “museum of science”.

“Every museum looks to the past. The prefix “anti” does not mean anything negative. Frankly speaking, this is not a scientific museum. Actually, it is not even the museum of future. It is amazing when you press a button, and these devices assist you in developing your ideas. Our museum is not that large to demonstrate all the technological advances. When I travel around the world and visit the so-called “scientific museums”, I see that they are not the museums of science, but rather the museums of local history. This exhibition focuses on the audience that loves to have fun, but for a specific purpose. We are businessmen who speak about science.”

“I would like to develop a park of popular science. I need about 3,000 square meters of land. I want to show all modern technologies at one place.”

“If by that time, I had have necessary funds at my disposal, I would have liked to build that park on a land plot along the Lesce – Radovljica transit highway. Ljubljana is a big city, and the price for land there is the highest. Since Slovenia is small, it is not necessarily to stay in the capital. Of course, I thought about all the proposals, but I did not related this project to the financial possibilities, since the benefit would be much higher than the initial investments. Now we are quickly moving on to the next technological level. About 15 years ago, not everyone could afford a cell phone. My first computer costed 11 thousand dollars. Now my smartphone, which costs 60 euros, is more powerful than that computer. When we understand the real pace of the contemporary progress, we say to ourselves that we already belong to the retro style, because the progress is faster than we think. Therefore, my idea is directed to the future.”

Which device among those that you have in your museum is of real practical value for the future?

“The high voltage technology, which could be used in the trains of future. Modern trains are not fast enough because of the friction. A magnet can be of much help in this case. The Best Motors Company has developed a concept of trains movement in tunnels, whereby the air escapes when a train is moving, its resistance decreases and, accordingly, less energy is needed to achieve higher speeds. In accordance with this concept, an electromagnetic train could reach speed up to 1,200 km per hour.”

“Why not? Two companies are already conducting a series of experiments. The “Antimuseum” also demonstrates a linear accelerator, which is known as a “rail gun”. By using a model of the device, which is in our museum, we could launch nano satellites to the space. This technology is used to study space programs. The only thing you need for this is the electricity.”

Are you here with your family?

“With my wife and daughter, who is at the 6th grade. We also have an Alsatian dog. My son will soon graduate from the secondary school in St. Petersburg. In the summer, we will think about where he will continue his studies. One of the options is the University of Ljubljana. Physics and mathematics are the priority subjects.”

Studying physics, the son will go in the footsteps of his father. What did you do for a living after graduation?

“I was working in the enterprises from India, China and other countries engaged in the energy sector. They built nuclear power plants worldwide. In the early 1990s, when the Soviet Union collapsed, the science was going through tough times. So I started doing business, but not because I liked it very much. I am interested in science, which I combine with the business. I have to work continuously to keep qualified engineers.”

What do you read when get up in the morning? Scientific papers and journals, to be in the know?

“I haven’t been reading newspapers for several years. Most of all I like to read the website of the American Popular Mechanics journal. However, I would be happy to read them, but since I am not a morning person, I get up late, and thus my morning is short. Let me show you what I have on the desktop — scientific articles. Digest also collects information. Some is speculative. You have to search a lot until you find the reliable information, then keep looking until you manage to find detailed original data. See how many stupid things they post up here. For example, a quadcopter. It is of no interest any longer. Everyone can buy it. However, it is interesting that in Germany they use it to deliver postal correspondence. Alternatively, a mini-flash for iPhones. That is nothing. What is really worth our attention is the SpaceX rocket, which has landed on the oceanic platform for the second time. It’s good that you have an opportunity to choose, and bad — that the choice is too wide.”