Home » Regions of Slovenia for Your Business. Part 2

Regions of Slovenia for Your Business. Part 2

We continue to tell you about the regions of Slovenia. We have already presented to you the first five regions in our previous article. Today we would like to consider the remaining 7 regions located in the direction from Central Slovenia towards Austria and Hungary.

By the way, not so long time ago, Slovenia was represented by only 6 regions. The modern administrative division was introduced only in 2005 to collect more accurate statistical data on the country. Therefore, in many sources, the regions of Slovenia are called statistical regions. 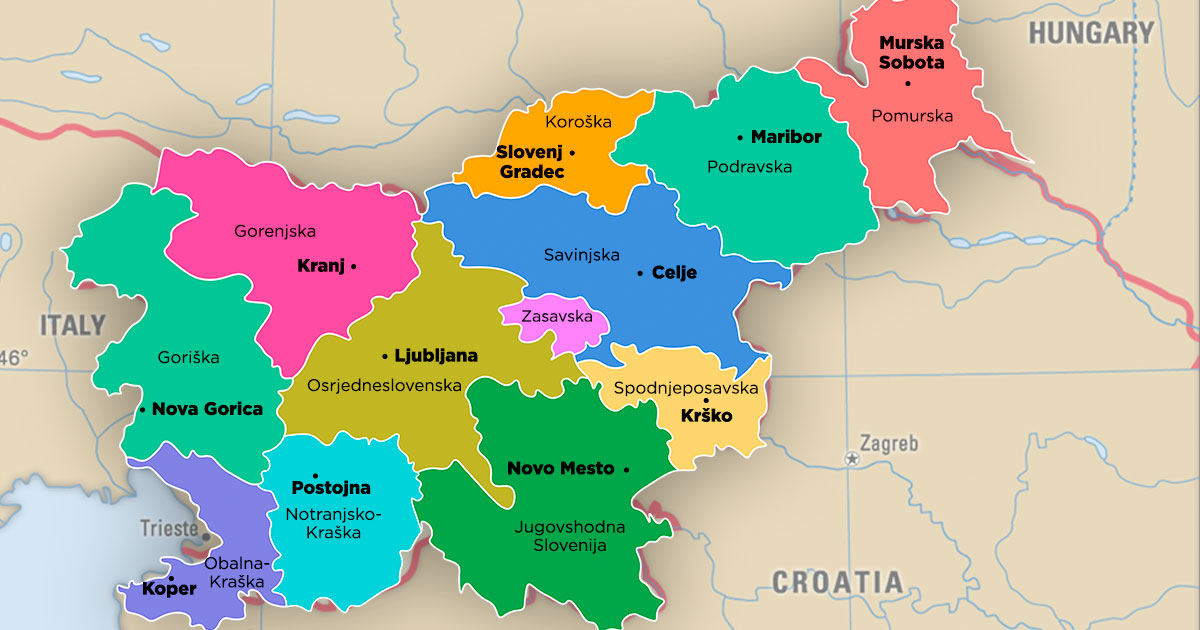 The country’s largest region in terms of area is located in its southern part. The centre of the region – Novo Mesto – is also the industrial centre of Slovenia. The KRKA pharmaceutical plant and the largest Revoz automobile plant are located here. Dolenjske Toplice (the first spa resort in Slovenia) and Šmarješke Toplice with its hot springs are located on the banks of the Krka River. They represent a health complex for rehabilitation treatment including the use of apitherapy, which is widespread in Slovenia thanks to the developed beekeeping. The Krka and Kolpa rivers attract lovers of kayaking and rafting. The same as in the old days, various crafts are extremely popular in this region.

This is the smallest region of the country located in the central part of Slovenia, in the immediate vicinity of the Central Slovenia region. Trbovlje, the region’s centre, lies in the Sava River valley. It is a developed industrial centre with various enterprises engaged in mechanical engineering, power engineering, chemical and construction industries (cement production). Historically, the region was the centre of the mining industry in Slovenia.

The region is located in south-eastern Slovenia and stretches all the way to the border with Croatia coinciding with the lower course of the Sava River. This is the part of the river course that provides optimal opportunities for generating electricity – 4 hydroelectric power plants operate here. Krško is home to the only Slovenian nuclear power plant, which, however, is also used by Croatia. The region also possesses a developed agricultural sector – there are many vineyards, fruit and vegetable growing companies here. There is also the Terme Čatež Spa & Wellness Centre with a year-round extensive offer of hydrotherapy, kinesiotherapy, balneotherapy and other types of medical and preventive treatments.

The Savinja Region – Savinjska regija. Area: 2.384 sq. km. The administrative centre is the city of Celje.

Located practically in the centre of the country, the region is part of Lower Styria, a historical region in Central Europe. It has got its name in honour of the Savinja River, which flows through its territory. Thanks to the climate and fertility of the Savinja region, Slovenia takes the 4th place among the world’s hop cultivating countries. The which locals affectionately call hop their “green gold”. Celje, the third-largest city in Slovenia, is the centre of high-tech industries. It is here that the largest international trade fair in south-eastern Europe is held annually. The city of Velenje is also located here. It is the headquarters of the Gorenje Group. Rogaška Slatina, the oldest and most famous thermal resort in Slovenia, belongs to one of the most popular tourism and recreational facilities in the region. It is famous for its mineral springs with drinking water. The Donat Mg water brand that is produced here can be found in stores around the world.

The region is located in the north of the country among the mountain peaks and passes along the valleys of the Drava, Meža, and Mislinja rivers. Agritourism, livestock and forestry are the key income providing industries for the region. The municipality of Jezersko is located in the western part of the region being home to ophthalmological clinics. The region is also famous for the Ravne Metallurgical Centre. UNESCO declared Slovenj Gradec to be the symbol of peace – numerous cultural events take place here every year.

The Drava Region – Podravska regija. Area: 2.170 sq. km. The administrative centre is the city of Maribor.

The region is located in the north-east of Slovenia and stretches along the Drava River, the most fertile river in Slovenia. The Drava River, as well as the Sava River, accommodates hydroelectric power plants. It is here that the famous oldest grapevine in Europe is located. This grapevine is already 400 years old, however, it is still fertile. The wine made from its grapes is used as honourable gifts. Therefore, the Drave region is another wine-growing region of the country that produces wines of the highest standard. Maribor is the second largest city in Slovenia. Thanks to the world-famous Mariborsko Pohorje ski resort, it has the status of an Alpine city. It houses the second largest state university in Slovenia – the University of Maribor, the most successful Slovenian football club, and the country’s largest theatre – the Slovenian National Theatre. One of the remarkable places in the region is the town of Ptuj, the oldest town in Slovenia.

Located in the north-east of Slovenia, the Mura region is one of the flattest regions in the country. Murska Sobota is actually the only city in Slovenia located entirely on the plain. The Mura region borders Hungary. Therefore, Hungarian is recognised here as the country’s second official language. The region has got its name from the Mura River, which separates it from the rest of Slovenia. The Mura region is the centre of Slovenia’s largest wine production including sparkling ones. The Radenska mineral water has been bottled here since 1869 and exported all over the world. The region is rich in thermal spas based on local thermal springs – Moravske Toplice, Lendava, Radenci, etc.

As you can see, Slovenia is a small country but very diverse and fertile. Each of its regions has its own unique attractions with amazingly beautiful nature everywhere around the country. We invite you to definitely visit Slovenia!